LOOKING FOR A FRIENDLY AND RELIABLE ARBORIST IN Benowa?

Our expert arborist team is in Benowa regularly doing tree removals, tree pruning, tree lopping, and other tree services. Check out what other Benowa customers have been saying about us, making us the highest-rated Arborists in Benowa! 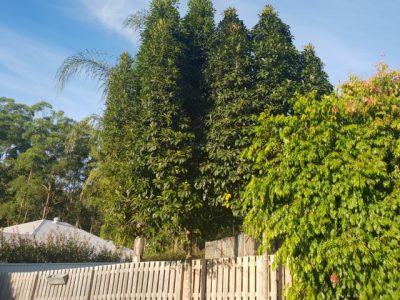 Benowa is a suburb located in the City of Gold Coast, particularly located just 3 kilometers west of Surfers Paradise.

According to the 2016 census, Benowa garnered a population of 8,741 individuals that consists 52.6% of females and 47.4% of males. The suburbs median age was approximately 43 years, 5 years above the national median of 38.

The name Benowa was originally derived from the Bundjalung word ‘Boonow’ which means bloodwood tree. This term was later corrupted by European settlers in search of sugar cane that grew on the shores of the Nerang River. The name got stuck as the suburb was perpetuated in 1870. A pioneer named Robert Muir used the name Benowa as the name of his sugar plantation located on the northern bank of the river.

The Bundall Provisional School was established in 1885 on the corner of Ashmore Road and Mediterranean Drive. The name of the said school was changed to Benowa Provisional School in 1900, only to be relocated to the corner of Ashmore Road and Carrara Street in 1909. The present location of the school is in Benowa Road as it was relocated there in 1965.

The suburb is held under the Federal Division; Moncreiff, an Electoral Decision in Australia that was established in 1984 and was named an Australian singer, Gladys Moncrieff who also lived in Gold Coast.

There are 3 districts in Benowa; first, Established Benowa on the northern side of Ashmore Road; second, Benowa Hills, and third, Benowa Waters. Most of the surviving homes in Benowa were built in the 1980s, today these homes attract a lot of renovators because of it’s proximity to Surfers Paradise and Broadbeach. With so many great facilities near Benowa, it’s easy to see why more and more people are crowding towards this suburb.